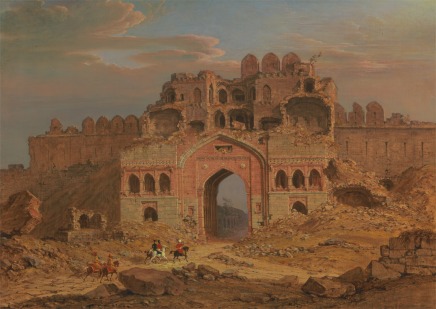 The Yale Center for British Art reopened this week after a year-long renovation. In addition to its outstanding collection from the British Isles, the gallery now prominently features art from India, the Middle East, and the Caribbean. Art historians have only recently begun to take colonial art seriously, but seeing art from all over the British Empire under one roof shows how both colonizers and colonists influenced each other. And it serves as a powerful reminder of how globalization is both an old process and one that is inseparable from the rise and fall of empires.

For many people, empire means the rule of one country or people over another. We often think of pith helmets and racial domination when we think about empire, but as historians are increasingly making clear, empires have existed throughout history and taken a wide variety of forms. They’re not particularly European, even if European empires serve as our largest and most recent examples. And even those empires were often very different depending on where one stood. The British Empire, with its trading companies, dominions, protectorates, mandates, and several hundred years long history was not so much a single, monolithic entity but a patchwork of different of institutions, connections, and people that changed dramatically over time. The same could be said of the French or Spanish empires.

And yet those European did have tremendous consequences for the world we inhabit today. By 1913, they ruled more than half of the world’s surface and more than half a billion people. That expansion shaped economies, institutions, and political systems all over the world. The legacy of that experience was one not only one of European domination and violence, but of cultural exchange and migration that often blurred the lines between imperial powers and the colonies they ruled.

What the relationship between colonizer and colonized was might seem a question for the history books, but it still matters a great deal. In some cases, the persistence of colonial ties is cosmetic, like Bermudan police uniforms. In others, it’s more substantive, like the Indian legal system’s debts to the common law and to the Raj. In still others, it’s tragic, like the sectarian divisions at the heart of the Syrian Civil War. Those powerful legacies, which shape everything from economic inequality to contemporary racial politics, help explain why on both sides of the Atlantic we continue to debate figures like Cecil Rhodes, John C. Calhoun, and Woodrow Wilson.

These debates ultimately boil down to whether the present ought to atone for the empires of the past. But while it’s easy to see empire as a one-sided exercise in European domination that all right-thinking people ought to repudiate, it’s not clear that for all of its violence and inequality empire’s legacy has been one of unremitting evil. Last week, London elected Sadiq Kahn Mayor of London. The son of Pakistani immigrants, Khan is the first Muslim to be elected mayor of major European city. His election shows how one consequence of the British Empire has been to create to transform London into fantastically diverse and globally engaged metropolis. Indeed, London has a long history of embracing leaders with colonial connections. In the eighteenth-century, Barlow Trecothick, who spent much of his early life in Boston, and William Beckford, who was born in Jamaica and became the island’s richest slaveowner, both served as Lord Mayor of London. That history show that in a world of empires what it means to be British or colonial is not always clear cut. Like Khan, they demonstrate that even as empires multiplied the inequalities between rulers and ruled, they also created opportunities for business, politics, and culture to flourish.

The Latest from Chess